Are you and your pet getting the most out of taking the dog for a walk?

Owning and exercising a dog is a great way for you both to maintain your health and for dog owners to ensure they get their recommended 30 minutes of physical activity most days of the week.

But remember that dogs are susceptible to the same health problems that inactivity brings, such as obesity and diabetes.

Professor Adrian Bauman is a Jack Russell owner and director of the University of Sydney's Physical Activity, Nutrition and Obesity Research Group. Here are his tips for maximising the benefits of dog exercise, from the Sydney Morning Herald:

Or better still just let him cool off in some nice water on a hot day!
Posted by Rosie at 19:33 No comments:

When Charlie Annenberg adopted an abandoned golden retriever named Lucky, a new breed of philanthropy was born. Annenberg incorporated Lucky into all his projects - making documentaries about people who were making a difference.

Lucky became Annenberg's sidekick & soul mate and would eventually inspire donations to dog-focused causes. Across America everywhere they went Annenberg filmed Lucky interacting with people and places. In 2010, Annenberg used his Lucky photos & films for a travel journal on Facebook, recording stories of their trips.

Annenberg called the journal Dog Bless You, he said, because several years earlier Lucky had befriended a homeless man in San Francisco. They shared time and a sandwich with the man. As they were leaving, the man said: "Dog bless you."

The Facebook page was all about Lucky, captured the fervor for pets that was growing around the country with over 500,000 fans. Annenberg (grandson of the late publisher, ambassador and philanthropist Walter H. Annenberg) heads up The Annenberg Foundation which gives away up to $8 million a year. In just three years, he's donated 170 guide dogs, search & rescue dogs or service dogs for veterans.The majority of the dogs funded by Annenberg have been for veterans. "Hearing the stories of how these dogs help bring their humans out of the darkness is incredible. In some instances, having the companionship of a dog is what motivates them to keep going – it gives them a purpose and reason to get up in the morning." said Dog Bless You fan Rachel Nelken of Vancouver, British Columbia.

As Lucky aged and slowed down, the format of Dog Bless You changed, becoming a tribute to every dog. And Lucky had to retire from travelling. Annenberg misses Lucky at work...
Posted by Rosie at 19:12 No comments:

How can service dogs help Parkinson’s?

Service dogs are specialty trained to help and protect people with vision, hearing, physical and emotional challenges. Some of the earliest and well-known use of service dogs is the use of guide dogs for blind or visually challenged persons. Many people with Parkinson’s Disease use a Mobility Assistance Dog. Sometimes a special harness is worn by a Mobility Assistance Dog made for pulling objects, such as wheelchairs or helping someone balance. Service dogs can help a person with Parkinson’s disease in many ways. Here are just a few of the ways:

Remember these are service dogs and not pets nor a guard dog. They are wonderful and amazing animals that can help you live better. You can contact the following sources for more information:

Please remember not to interfere with a working Service Dog. This lovely video clip will remind you why!

Do We Really Want A Generation Of Couch Potato Dogs?

We often park children in front of electronics at home or in a restaurant. It looks like we can do the same with our pets. DogTV will cost subscribers $5.99 a month to broadcast content 24hrs a day, 7 days a week, to capture the attention of our dogs. The company describes the channel as “scenes with and without other animals, animation sequences and a variety of moving objects.” There will also be relaxation segments which will show sleeping dogs and nature scenes, while playing soothing music. 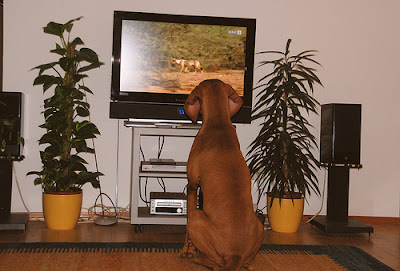 Home Alone: Studies have shown that dogs left at home alone, while their humans are at work, do better when the TV is left on. The content on DogTV was developed scientifically, using research groups, and with input from dog trainers, and is designed to prevent anxiety, depression and boredom. When dogs are left alone they often become anxious, and that’s when they tear things up. The programming provides dogs with segments meant to stimulate and invigorate them, as well as segments to calm and relax them. 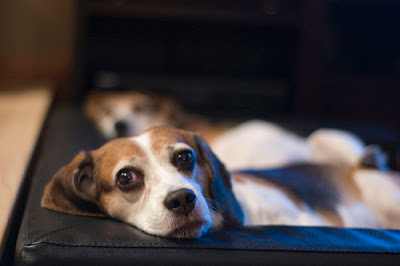 The stimulation segments show dogs running, frisking around, and surfing. The hope is that it will encourage the dog watching the show to get up and move around in excitement. There are also segments designed to expose dogs to things they need help getting used to. Images of other dogs help socialize them, other sounds and images like traffic sounds, doorbells, babies and children, and other animals are all included to help get your dogs accustomed to those things. 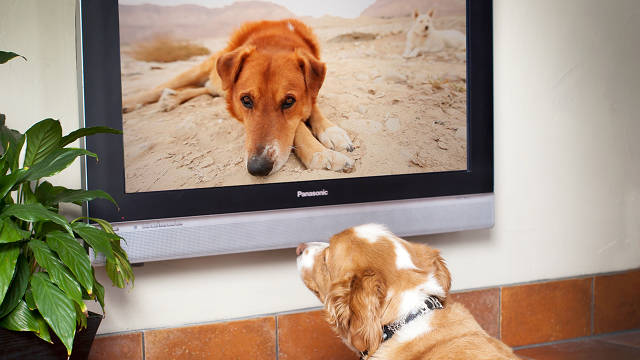 DogTV is recognized by the Humane Society of the United States for improving the quality of dogs’ lives.  Dogs that are made to feel confident and happy when they have to be left alone are less likely to be stressed, or have separation anxiety.

These programs were created specifically for dog’s vision and hearing, and their behaviour patterns. Filmmakers had fun making the segments, getting down on the ground to shoot from Dog Point Of View. Editors worked with the film to tone down the colours, cut high frequency sounds, and add music. Dogs can see the colours blue and yellow, but not red or green. Past research on dogs shows that they could only see a flickering screen on old analogue televisions. Newer technology allows dogs to see images as long as they are the right colours. There are no plans to run commercials on the channel, and new content will be added all the time. Remote Control Wars: If your dog wants to watch his “stories” while you’re home, and you don’t want to give up control of the remote to your hound, you can stream the programming to a computer for $9.99 a month.
Source: Dog Weight Loss - Eva Ramirez
Posted by Rosie at 19:48 No comments:

The Benefits of Owning a Dog!

Good Dog! is a film festival screening engaging films that include a dog. The annual festival is held on Sydney Harbour, nestled in the historic suburb of Balmain. All profits are donated to Australian and International dog charities.

A vest developed by a research team at Georgia Tech is aiming to give trained dogs the ability to "speak" to their owners.

The project, FIDO (Facilitating Interactions for Dogs with Occupations), would allow dogs to communicate crucial information - be it about navigation for the blind, bombs for security, or diagnoses for doctors - to their handlers or owners. The basic idea behind the project is to combine technology with dog smarts. Dogs are some of the best security devices around. They can do everything from sniff a bomb to detect cancer. One thing they are not terribly good at, though, for obvious reasons, is communicating with people.

That's where FIDO comes into play. A sensor/transmitter device attaches to the dog's collar or vest, or to the dog's handler.

Say the dog is out to diagnose forms of cancer, and detects bowel cancer in a patient. The dog can then trigger the appropriate sensor by "biting, tugging, or putting their mouth nearby," Technology Review explains.

Each sensor would correspond to a different scent (or in this case, form of cancer), and with training the dogs would learn to associate a particular scent with a particular sensor. After the sensor is triggered, the information can be transmitted to a device or directly to the handler's ear, effectively enabling dog-to-human communication.