A lucky homeless dog has been given a whole new lease of life by another stray mutt. Two year old Tanner was born blind and has a seizure disorder. He was sent to Sooner Golden Retriever Rescue Organization, Oklahoma City, after his owner died.

Due to the stress of his loss, his seizures became worse, making him hard to look after as he would defecate and urinate when fitting. Local vet even recommended putting the dog down, to relieve Tanner of his and his caretakers' misery.

Fortunately for young Tanner, Blair, a one year old black Labrador, has shown uncanny empathy for his new friend and now has taken the role as his guide. Staff say the dogs' bond is extraordinary.

'One day they were exercising in a play yard together and they got together,' says Dr Jones. 'Blair seemed to realize that Tanner was blind and just started to help him around.' 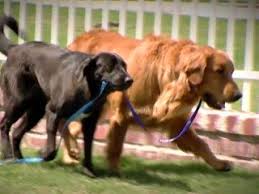 The black Labrador guides his pal around the enclosure and buildings, picking up his leash in his mouth when necessary to steer him to safety and play.

The friendship seems to have had a strong healing effect on both animals. Blair, a formerly timid and nervous dog who came to the shelter after being shot, has become a stronger, more confident pooch thanks to his new-found responsibility.

Even more amazingly, Tanner's seizures seem to have disappeared and now the two dogs board together, inseparable in their companionship.

'We've worked with a lot of different service dogs to provide these services for people but it's the first time I've seen anything like this,' said Dr Jones.

The rescue centre is now looking for someone to adopt the two animals together.

'They absolutely have to be adopted together,' said Dr Jones. 'But it's going to take a special home with someone who understands their special relationship plus understands seizure disorder and is ready to take on the responsibility.'

Unusual symbiotic partnership formed between prisoners and greyhounds at Hakea prison that benefits both parties trying to find new lives.

Valuable vocational skills are being imparted to inmates at Hakea Prison, following the launch of an innovative program that prepares retired racing greyhounds to be family pets.

Companion Animal Service Employment Centre (CASEC)  program is being undertaken in partnership with the Department of Corrective Services, Greyhounds WA, Community First International and Extra Edge Community Services, with up to 100 prisoners learning to re-socialise the dogs through obedience training and exposure to a non-racing environment.

Corrective Services Commissioner Ian Johnson said the program was a win-win situation for both Hakea prisoners and the greyhounds.

“The dog handling and general workplace training skill modules delivered will certainly increase the employability of the prisoners, and at the same time enable retired greyhounds to become valued family pets.”

Each program consists of 12 prisoners and 4 ex-racing greyhounds over 6wk period. Programs will be delivered by Extra Edge Community Services and Greyhounds WA.

“We will be mentoring and supporting the participants through a program of caring for, managing, training and assessing the retired racing greyhounds while (the prisoners participate) in workplace skills training sessions.” Louise Gray CEO Extra Edge

Both the prisoners and greyhounds will benefit from this program. Prisoners develop their employability skills, dog handling skills, as well as their self esteem, teamwork skills and sense of responsibility. The greyhounds will be trained to become family pets, as well as give them a loving and peaceful retirement.

Greyhounds as Pets manager Kerry Dibbin says 'greyhounds made excellent companions'. The program has been funded by the Australian Government through the Innovation Fund

Source: www.eecs.org.au/community-projects/companion-animal-service-and-employment-centre
Posted by Rosie at 16:32 No comments:

The Dog Squad Program, an initiative of Young Diggers Australia is a new Service & Assistance Dog Training course for serving and ex personnel suffering from PTSD or other mental and physical illnesses to enable them to train their own Service Dog.

The program will get under way early in 2012 run by Service Dog Training.

Service Dog Training is the pro-bono arm of K9Coach Pty Ltd, a well established behavioural dog training company. Founder Hans van Heesbeen uses TEAMWORK®framework from TOP DOG USA, a charity which has used this methodology successfully over the past 23 years in the USA.  Service Dog Training’s joint venture with Young Diggers will see a program tailored to the specific needs of serving and ex military personnel.

The Dog Squad Program is designed to allow Young Digger handlers in the program to assist each other whilst working with their dog training, playing and bonding whilst benefitting from the help of a colleague with the same goal.

This program is free for ‘Service Members’ of Young Diggers!

SCAS’s new ‘Introduction to Animal-Assisted Interventions’ Course has been developed as an introduction to the key concepts underlying animal-assisted interventions (AAI) and its first intake is now open for applications.

The online course is suitable for anyone who has an interest in the therapeutic potential of companion animals or is looking to increase their knowledge base in the subject and may not yet be currently practising in AAI.

For more information on this wonderful new course visit www.scas.org.uk